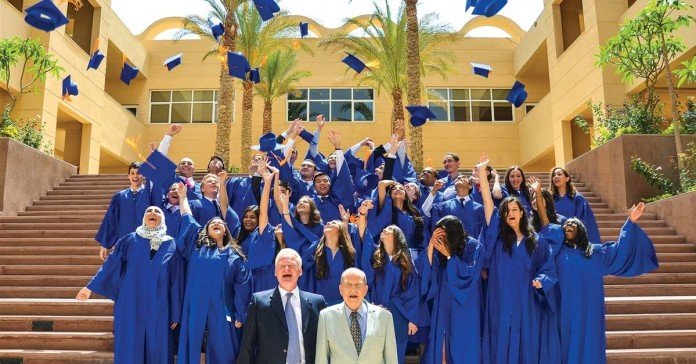 Despite having the largest overall education system in the Middle East, Egypt was rated as the worst country in the world in quality of primary education by the World Economic Forum Global Competitiveness Report. In response, Egyptians sarcastically found pride in being number one at something, even if it’s from the bottom. But that’s not to say that all schools in Cairo offer a poor education. Parents that can afford to invest more in their children’s education can take comfort in the fact that Cairo is home to a small number of world-class schools. So to help you on your quest of giving your little ones the best education, we’ve put together the following list of the top 10 schools in Cairo.

Our decision to rank Malvern College Egypt as the best school in Cairo was an easy one to make. MCE outperformed all schools in Egypt in almost every assessment criteria by some margin. They may not be the oldest school in Cairo but they have successfully leveraged more than 150 years of experience of their mother school in the UK (MCUK). They have brought in friendly, talented and experienced teachers from the UK to deliver the British national curriculum, with adaptations made to cater for the local and international context. The campus is a wonderful place to be. It is modern, safe, and has all the facilities you can imagine to make sure your children receive the best education in Egypt. The students at MCE constantly achieve some of the best exam results in the Middle East. In fact, they are an absolute delight to be around. They are critical thinking intellectuals that are always ready for a healthy debate. But the teachers have moulded them into more than just fine pupils. They have given them a highly developed sense of social awareness and community service. All this results in an extremely high satisfaction level among parents – 96% to be exact, and the highest among all schools in Egypt. In short, Malvern College Egypt is a shining example of what an international school should be like, and one that can rub shoulders with the world’s best.
Certificates: IGCSE, A Levels, IBDP, MCE and MCI Diplomas
Where: B2-B3 South Ring Road, Investment Zone, Kattameya, Cairo, Egypt
Contact: +20226144400, Website, Facebook, Instagram

Metropolitan School may be one of the younger schools in Egypt but that didn’t stop them from earning a spot on our list. This brilliant school in New Cairo scored magnificent results in all of our inspection criteria. The campus is spacious, secure, well-maintained, and absolutely spotless. Most of the teachers are foreigners brought in to apply western education standards – and we’re not complaining! The teachers we interviewed oozed with knowledge and experience. Our undercover observations proved that they treat the children with care and respect, while keeping them engaged and interested in their studies. Academically, this school applies the American Curriculum to an impressive degree. In fact, this is the first school in Egypt to embed entrepreneurship into the core program – a bold move but one we absolutely love. Overall, Metropolitan School is a true contender for the best school in Egypt for children aged between 3 – 11.
Where: 7 Khaled Ibn Al Waleed St, New Cairo
Contact: 16489, Website, Facebook

BISC is one of the oldest private international schools in Cairo known for its academic performance that rivals the very best schools, not just in the Middle East but the entire world. The ‘biscuits’, as their students are affectionately nicknamed, are injected with a strong sense of British discipline from a young age. Tuition fees are high compared to the rest of the schools on this list but still cheaper than many private schools in the UK offering an education of similar quality. BISC is noted for a reputation of excellence based on the legacy of their former campus in Zamalek. Whilst their standards have dropped ever so slightly since their move to a new mega-campus in west Cairo, they are still regarded as one of the best schools in Cairo.
Certificates: IB Diploma, BTEC in Business, IGCSE, GCSE
Where: Cairo-Alex Road, Beverly Hills
Contact: +20238270444, Website, Facebook

Many schools in Cairo try to recreate the American schooling experience but none of them do it as well as CAC. Located in Maadi, the well established school is made up of a huge number of expats, especially Americans due to its ties to the US embassy. The academic programs at CAC include the Advanced Placement (AP) and IB Diploma, making it an ideal platform for students to continue their higher education at leading universities across the globe. CAC promotes athletics more than any other school on this list, making it a great choice for parents that want their children to get a high quality education and stay healthy at the same time. However, an education at CAC doesn’t come cheap as it’s the most expensive of all the schools in Cairo. But if money is not an issue, and you want your child to have the best American education in Cairo, then you can’t go wrong with CAC.
Certificates: IB Diploma, Advanced Placement (AP)
Where: Maadi
Contact: +20227555555, Website

DEO is arguably the best German school in Cairo. The school was founded back in 1873 by the Protestant congregation of Cairo. Their graduates include the Sawiris brothers, Amr Hamzawy, Aida El Ayoubi and Mohamed El Sawy. Today, DEO’s students continue to honor the school’s rich history with exellent academic results. The parents we spoke to couldn’t be happier with the decision of sending their children to DEO. The German curriculum is a tough one by all means, but DEO ensures their students are given ample attention by maintaining small class sizes. The 190+ German teachers do their job with aplomb. They teach discipline, and encourage critical thinking. DEO’s charity work is remarkable, providing food and supplies to the homeless.
Certificates: German Abitur
Where: Dokki
Contact: +20237481645, Website

NCBIS is another brilliant international school that follows the British curriculum. The campus is situated in the east of Cairo, providing students with an exceptional learning environment. Academically, the school consistently performs very well thanks to a motivated student body, and the school’s ability to recruit top teachers from around the world. The cultural diversity at NCBIS is remarkable with more than 63 nationalities represented in the student body. Only BISC and CAC have been able to boast similar figures in the past. With the notoriously challenging but equally rewarding IB Diploma on offer, NCBIS cements its spot on our list of the top 10 schools in Cairo. Overall, NCBIS features great facilities, a friendly and international mix of students, and high calibre teachers.
Certificates: IB Diploma, IGCSE, GCSE
Where: 5th Settlement, New Cairo
Contact: +20227582881, Website

MBIS is one of the most well-established and successful schools in Cairo, offering a first-class education to tiny expats from 40 nationalities. And when we say tiny, we mean it, as this school caters to children aged 2 to 13 years. The teaching staff is predominantly British and the class sizes are small giving your children the attention they deserve. As for the campus, it’s well maintained, safe and secure. Staying true to their British nature, MBIS encourages its students to explore and question everything. Laying the foundation for a critical and independent mind will greatly benefit your children if they move on to a school like BISC, which is famed for its philosophy discussions and gripping debates at IB level. In short, if your children are starting school for the first time, or below the age of 13, we think MBIS is a great place for them.
Certificates: None (ages 2 to 13)
Where: Maadi
Contact: +200227058671, Website

MES is one of the few schools in Cairo that offer its students the option to choose between the British and American curricula at secondary school. Children that pick the British path will end up with IGCSE and A Level certificates, whilst the American route culminates with the AP exams and a high school Diploma. Alternatively, braver students can opt for the daunting IB Diploma during their final two years. MES’ curricular choice offers flexibility and convenience. But they do not compromise on the quality of education, even with its 2-in-1 feature. The teachers at MES are just as good as any school on this list, and their facilities are superb. MES is not as expensive or as selective as the so-called Big Three (BISC, CAC, NCBIS), making it a decent alternative if you’re looking to send your child to a terrific school that won’t burn a hole in your pocket as big as some of the other schools on this list.
Certificates: IGCSE, A Levels, Advanced Placement (AP), IB Diploma
Where: 5th Settlement, New Cairo
Contact: +20226189600, Website

9The International School of Choueifat

Along with AISE, Choueifat is one of the top schools in Cairo with two campuses. One is situated in the 5th Settlement in the east, while the western campus is in 6th of October City. Choueifat is part of the SABIS Network of schools, which is essentially a global education network that can trace its roots back to 1886 when the International School of Choueifat was founded in the village of Choueifat, a suburb of Beirut. Academic standards are high, and delivered in a well-structured manner developed by years of experience by SABIS. Many parents will be pleased to learn that Choueifat adheres to a non-selective admission policy. The school is praised for its facilities which include indoor swimming pools, IT and science labs, over-sized libraries, and a 600-seat theatre.
Certificates: IGCSE/GCSE
Where: 5th Settlement, New Cairo & 6th of October City
Contact: +201006069004/1, Website (5th Settlement), Website (6th of October)

Two campuses, one in the 5th Settlement, one in Sheikh Zayed, makes AISE one of the most accessible, high quality schools in Cairo. The students are challenged with a holistic and comprehensive American curriculum, giving them the opportunity to study at universities in the USA and beyond. Parents will be happy to hear that AISE offers the renowned IB Diploma but we doubt students will be as excited with that news. Facilities are nothing short of state-of-the-art when compared to the rest of the schools in Cairo. Unfortunately, behaviour and discipline has been a troublesome issue for AISE in the past. But it seems as though the school has taken the correct steps to rid itself of this somewhat reputation-denting problem. Today, AISE offers its students all they need for a balanced and superior American-style education, putting the school well on par with CAC in many regards.
Certificates: IB Diploma
Where: 5th Settlement & Sheikh Zayed City
Contact: +20226188400, Website (5th Settlement), Website (Sheikh Zayed City)

Now it’s your turn. Let us know if we’re missing a great school in the comments below. If you’ve had a particularly good or bad experience with any of the schools listed above, please let us know in the comments section. Want to get in touch with us? Just click here and drop us a message.

The Top 10 Universities in Cairo

The Top 10 Schools in Cairo

Despite having the largest overall education system in the Middle East, Egypt was rated as the worst country in the world in...

The Top 10 Universities in Cairo

The Top 10 Nurseries in Cairo

10 Best Places to Have Breakfast in Cairo