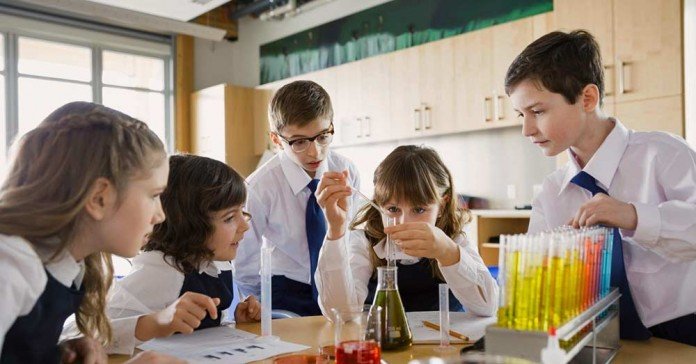 The Lycee Francais du Caire is quite possibly the very best of French schools in Cairo. It would certainly be hard to argue such a claim considering their excellent academic performance, beautiful campus, and the brilliant feedback we got from the students and the parents. The fees are a bit higher than some schools on this list, but we feel its well worth the money. Overall, it’s a superb French school with a growing reputation – one we doubt you will regret sending your kids to.
Where: Maadi
Contact: +20223582320, website

Concordia is not as old as some other French schools in Cairo, but one that is worth mentioning nonetheless. The school succeeds at delivering the French curriculum thanks to a blend of high academic and disciplinary standards. While the culture seems a bit conservative, the campus is spacious and welcoming. The admin staff are good at their job and pay a lot of attention to detail. Most of the students and parents we spoke to seem quite happy with the school and its proactive approach to improving itself.
Where: 5th Settlement (El-Tagamoa El-Khames)
Contact: +20229200101, website

Located in the East of Cairo, Balzac is another excellent school that follows the French curriculum. One of the key points that captured our attention was their accreditation by the French Secular Mission. In other words, Balzac encourages freedom of thought and critical thinking. Apart from the broad-mindedness theme, Balzac offers plenty of extracurricular activities for the all-round development of your child. A winner in our book!
Where: 5th Settlement (El-Tagamoa El-Khames)
Contact: +20225379358, website

Oasis is known as the first school in the world authorized to offer the three programs of the IB in French. And Oasis honors that fact by boasting some of the best IB results out of all the schools in Egypt every single year. The students seem open-minded, intellectual and inquisitive. They regularly take part in MUN conferences, building their debating skills and exposing them to global affairs. Oasis is a great choice with a lot of local and foreign teachers ready to provide your children with a fine French education.
Where: Maadi
Contact: +201227418222, website

Jésuites is a school that needs no introduction. But if you’re not familiar with this historic institute, Jésuites is a French school for boys founded in 1879, after a request by Pope Leo XIII for a seminary to help prepare students to become priests in the Catholic Church. Today, the school is less concerned with the preparation of priesthood, focusing more on delivering a valuable French based education to students of all religions. Over the years, Jésuites has produced some of the best talents from the world of business, politics, medicine, and film. Some notable alumni include Ramy Lakah, Hisham Selim, and Tarek Nour.
Where: Faggala, El Daher, Heliopolis
Contact: +20222918017, website

Collège De La Salle is a French school for boys located in El Daher district of Cairo. This school can trace its roots back to 1854. In our opinion, the students that attend Collège De La Salle tend to have a better grasp of the French language than students from other schools. We sensed a high level of discipline on our visit, and the students seemed very friendly, welcoming and confident. Speaking to alumni in their 40s and 50s, it’s clear that their experience at Collège De La Salle left a mark. They take huge pride in this school, and told us how their education wasn’t just based on books and numbers. They had sessions discussing problems at home, challenges of adolescence, advice on doing the right thing and respecting one another. Collège De La Salle is more than academics. It’s life lessons and long-term values. It’s brilliant.
Where: El Daher
Contact: +20225904740, website

Strictly speaking, GPIS is not a French school but it has a good French section. GPIS is the only school in Egypt to offer the three IB programmes (PYP, MYP and DP) in two languages: English and French. GPIS was founded in 1994 by a group of parents “who dreamt of offering their children a quality education.” Both campuses are pleasant, but we feel the one in Sheikh Zayed was a bit better in terms of facilities (pictured above). The students come from all walks of life and the school has a strong sense of community. Parent and student feedback was generally on the positive side, noting the excellence of the teachers at the IB diploma level. Fortunately, there’s lots of character building and critical thinking going on here thanks to the IB requirements. The only major complaint came from parents about the admin staff. Overall, a good choice and a decent alternative to many schools on this list, especially if you’re looking for a French-based IB education in Giza or Sheikh Zayed.
Where: Sheikh Zayed & Giza
Contact (Zayed): +201002226050, website
Contact (Giza): +20235405890, website

The Sacré-Cœur is one of the oldest and most respected French schools for girls in Egypt. Founded more than 100 years ago, the Sacré-Cœur offers a French section that culminates with the French Baccalaureate. The Sacré-Cœur has been turning girls into knowledgeable, hard-working and independent women for a very long time. They’re also famous for their high level of discipline and exemplary behavior. Our visits to both campuses, and interviews with current and former students confirmed the high level of intellect and discipline. In short, it’s the best French school for girls and one that cements its spot on our list with aplomb.
Where: Ghamra & Heliopolis
Contact (Ghamra): +20224452905, website
Contact (Heliopolis): +20225904740, website

Lycee Voltaire is the French arm of the Smart Village Schools. It’s one of the youngest schools on this list but certainly deserves its place among the top French schools in Cairo. Voltaire follows the French curriculum and culminates with the French Baccalaureate. The education is consistent with that of the French Ministry of National Education. The school is quite modern and the campus is a good size with all the expected facilities present. During our observation, the teachers stood out for all the right reasons. They are well trained and seem to know their material inside out. The students are mostly cheerful and disciplined. Their French speech is noticeably better than many other schools, and the older students in particular were eloquent and articulate. Finally, Voltaire promotes critical thinking – and to us, that’s the cherry on top.
Where: Km 28 Cairo-Alex Desert Road (Smart Village)
Contact: +20235370100, website

Collège De La Mère De Dieu in Garden City is a well-known all-girls school with a rich history dating back to the 19th century. The campus is dated and in much need of a refresh, and the facilities are limited due to Garden City’s lack of space and expansion restrictions. The school awards the French Baccalaureate diploma which is the same as what students obtain from high schools in France. Academic standards have dropped around the year 2000 but is seeing a renaissance in recent years thanks to a highly motivated student body. The most impressive feature of Collège De La Mère De Dieu is the strong sense of community and family. The students are disciplined and respectful of one another, and their teachers.
Where: Garden City
Contact: +20227924451, website